> Lab Equipments>Electrophoresis>SmartBlu. Blue Light Transilluminator (E4000)
Are you an Amazon customer? Pay now with address and payment details stored in your Amazon account.

The Accuris SmartBlue is the perfect transilluminator to use. Blue light, safe for nucleic acids.

This product is no longer in stock

Many new fluorescent dyes have been developed to replace the traditional method of nucleic acid detection using toxic EtBr.  The use of these new dyes eliminates the requirement for DNA-damaging UV light, as their fluorescent excitation can be achieved using visible, blue light wavelengths. The Accuris SmartBlue is the perfect transilluminator to use with these new dyes.

Safer for samples, safer for you: The SmartBlue Transilluminator is the perfect partner for the most common safe DNA stains. It emits blue light at a wavelength of 465nm, perfect for excitation of most green fluorophors, including our Accuris’ SmartGlow™, SYBR Green, SYBR Safe, SYBR Gold, GelStar, GelGreen, to name a few.  The SmartBlue also works for excitation of EtBr, see our Technical Bulletin with sample images.   Exposing DNA to this wavelength does not cause molecular damage, and results in a much higher downstream cloning efficiency as compared to even short UV light exposures. In addition, the visible blue light is not damaging to the user’s skin and is less harmful to the eyes.*

Two position filter cover:  The SmartBlue transilluminator requires no special shielding, however, the light does need to be filtered for visualization of the dyes. The amber cover, which rests above the viewing surface and gel, filters out the blue light, allowing the bands to be seen clearly. The cover can be placed at a 60º angle to provide easy access to the gel for band excision. For documentation, the filter cover is easily removed completely.

UI technology, bright and clear images:  Engineered diffusers and filters provide an extremely evenly lit viewing surface. Even in ambient light, bands of DNA can clearly be seen in gels. Images obtained using the SmartBlue Transilluminator are brighter and more balanced than those obtained using epi-illuminators which light from the sides.

* The SmartBlue product uses high intensity LED lights.  Although the visible blue wavelength is significantly safer than UV light, it is recommended to not stare directly at the viewing surface without the amber cover in place. 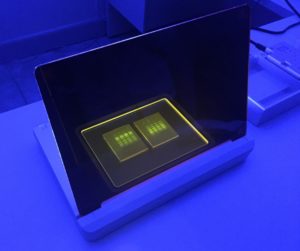